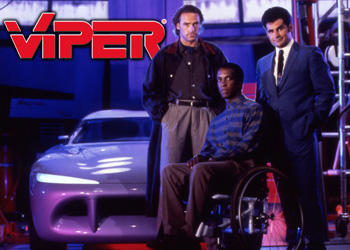 "The perfect weapon for an imperfect future."
"The day after tomorrow, a time when criminals ruled the city. The only weapon that can stop them, needs a driver. The most wanted man on wheels is about to change sides. Now, against a corrupt system, a lone fight for justice. VIPER is taking back the streets."
— Season One Intro
Advertisement:

Viper is a science fiction TV series that was created by Paul De Meo and Danny Bilson and aired from 1994 to 1999. The show revolves around a modified Dodge Viper that can transform into the Defender, an armored supercar designed for catching the most dangerous criminals. Think of it as a '90s version of Knight Rider.

The first season began filming in 1993 in LA area, and was planned to originally premiere on CBS in Fall 1993. However, it was delayed, first because Stephen Cannell also chose to name his new show "Viper", but after a lawsuit by Chrysler Corporation, he changed it to Cobra. Secondly, CBS deemed the series to be too violent and was about to bury it, but due to backing from Chrysler Corporation, the show proceeded on, instead it was aired as an NBC exclusive from January to April 1994 and disappeared from the network after completing its first run. The show came back for a syndicated second season in the fall of 1996. It retained this format up through its concluding fourth season.

Season 1 takes place in the near future, where the fictitious Metro City is being overrun by a mafia-like organization of cyberpunk thieves called the Outfit. The only thing that should be standing in their way is the Viper, but one thing is stopping the project from coming to fruition: the car is so powerful and requires such quick reflexes to control that every commissioned police driver to date has failed their field test. With funding running out and no hope of success remaining, the program is on the verge of cancellation.

Meanwhile, Michael Payton (James McCaffrey), the Outfit's lead getaway driver, lies in a coma after wrecking his Dodge Stealth in a botched heist. Seeing this as a final chance to save the Viper Project and promote his own political career, Big Brother-type Councilman Strand (Jon Polito) secretly orders for Payton to be pronounced dead and have a microchip surgically implanted in his brain to erase his criminal persona. After the operation, Payton wakes up with total amnesia and is told he is Officer Joe Astor, a false identity invented by Strand to explain why a supposed expert pursuit driver was transferred to Metro's police district just in the nick of time. Astor proves to be a suitable driver, but things quickly turn sour.

Parts of Astor's previous memories begin surfacing in the form of dreams and bizarre flashbacks, and he quickly puts together he's not exactly who the police say he is. He ultimately accepts his Mind Rape as a second chance to live a clean life and, upon realizing both sides of the law are corrupt, he hijacks the Defender with the help of its civilian inventor, Julian Wilkes (Dorian Harewood), and a sympathetic Metropol motor pool officer, Franklin X. Waters (Joe Nipote). The three crime fighters spend the rest of the season working out of a secret base converted from an abandoned power station. This course of action regularly puts Astor up against his old allies (and enemies) within the Outfit, who all easily recognize him despite being total strangers to him.

With a heavy emphasis on identity and morality, and featuring a soundtrack composed by Eddie Jobson and Shirley Walker, the first season had incredible writing and production values for something that was basically a weekly Dodge commercial. This creative style was abruptly dropped at the end of the first season and was never really picked up again.

Seasons 2 and 3 are less ambitious in design, but can still be entertaining on their own merit. The setting is shifted back into a strictly modern (i.e. lower budget) environment, despite still taking place in Metro City and explicitly being set after the events of the NBC series. Here, the Viper team is a legitimately employed police force fighting their city's latest crime wave. The show is almost completely recast, with Frankie being the only permanent character over the course of the entire series. The storytelling is also much more episodic, following a traditional Cop Show format where the heroes try to take down a different random criminal each week. There is no overarching group of villains, and the episodes carry little to no continuity between each other. Jay Ferguson takes over as soundtrack composer and maintains this role for the rest of the series.

Season 4 sees Joe Astor returning as the story's main protagonist and becoming a member of the Season 2-3 cast. It serves as a compromise between the show's two distinct formats, combining elements of both while trying to maintain a single canon. There are a few notable throwbacks to Season 1 spread throughout, but this season is most memorable for the two part finale entitled "Split Decision." In addition to ending the series as a whole, it can be seen as the proper (albeit somewhat flawed) conclusion the first season never received.