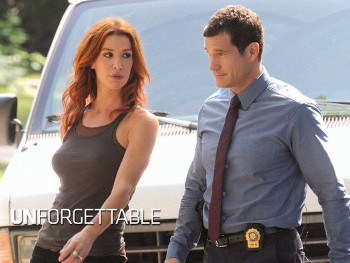 Carrie and Al.
Unforgettable is a TV series featuring Poppy Montgomery as Carrie Wells, a policewoman who can remember everything she's experienced in her life, except the details of her sister's death. It's loosely based off a short story by Prof. J. Robert Lenon, "The Rememberer".
Advertisement:

The series initially only got one season (2011-2012), but CBS Un-Canceled the show for a summer run starting August 2013 to stop it from moving to TNT or Lifetime; it ran for two shorter runs before being axed in October 2014. Then it was uncancelled a second time by A&E, only for the fourth season to wrap with another cancellation in February 2016.

As the series starts, Carrie, a former homicide detective with the Syracuse, New York police department, is living in New York City making her money by using her talent to break the bank at underground casinos. When her neighbor downstairs is stabbed to death, however, she encounters her former supervisor and lover Al Burns (Dylan Walsh), now a lieutenant with the NYPD and the investigating detective. She assists in solving this first murder and Al recruits her into his unit afterwards.

After the 2013 retool Carrie and Al move to the Major Crimes unit, helmed by Captain Eliot Delson.

Not to be confused with Unforgotten