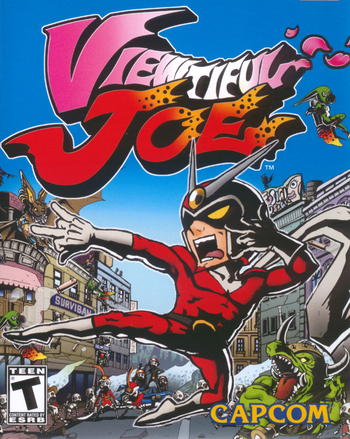 Viewtiful Joe is a combination of Platformers and Progressive Beat 'em Ups with Stylish Action elements developed by Clover Studio and published by Capcom. The games were originally released on the Nintendo GameCube, and also appeared in enhanced form on Sony PlayStation 2, with a third game on the Nintendo DS.

The story begins when film fan Joe and his girlfriend, "Sexy" Silvia, go to see an old tokusatsu movie called "Captain Blue". However, when the titular Captain Blue is defeated by the villain, said villain reaches out into the real world from the movie screen and kidnaps Silvia. Joe is also brought into the movie by Captain Blue's ship, the Six Machine. Now inside the world of "Movie Land", Joe meets his hero: Captain Blue, who has grown fat and old. Seeing immense potential in Joe, Captain Blue gifts Joe with the V-Watch, which with Joe, by saying the word "Henshin" (or, as he likes to say it, "Henshin-a-Go-Go, Baby!"), can turn into the superhero called Viewtiful Joe.

The first game saw Joe venturing through the various movie sets of Movie Land, fighting against the forces of Jadow, the evil syndicate that defeated Captain Blue and kidnapped Silvia. Joe fights and defeats the Mecha-Mooks that make up Jadow with his powers of VFX: VFX Slow, VFX Mach Speed, and VFX Zoom.

In the sequel, Joe and Silvia (who now has a V-Watch and can transform into a superhero, too), must stop another evil syndicate: Gedow. Led by the enigmatic Black Emperor, Gedow means to find the seven Rainbow Oscars, colorful statues that represent a force known as "the Power of the Happy Ending". Gedow captures and turns Captain Blue into one of these Rainbow Oscars, prompting Joe and Silvia to venture through new locales in Movie Land to find the remaining Rainbow Oscars and rescue Captain Blue, before the Black Emperor finds them and uses their power to escape Movie Land and take over the real world.

A third game, subtitled Double Trouble, was released on the Nintendo DS. It has similar gameplay, but new moves which take advantage of the double screen. Unlike the first two games, this one takes place in the real world, in an amusement park called... Movie Land. (Yes, seriously...) However, villainous entities within the actual Movie Land have finally managed to escape the realm and enter the real world. This new syndicate, Madow, is wreaking havoc in the amusement park, going so far as to steal the reel of a film Captain Blue's making starring Joe's sister, Jasmine.

Joe, of course, goes forth to defeat Madow and get the film back... but since he's in the real world, he doesn't have his V-Watch, thus can't transform into Viewtiful Joe. Blue and Silvia help him transform by constantly filming Joe with a special "V-Cam", which channels the "movie energy" Joe needs in order to transform into his superhero alter-ego and fight against Madow.

There is also a Mascot Fighter, Red Hot Rumble, featuring characters from the anime series, as well as a few from Devil May Cry in the PSP version of the game. This game is not connected to the main series, and its gameplay is similar to that of the Super Smash Bros. games.

These games are quite hard

, but also very good fun. Gameplay is reminiscent of old Streets of Rage or Teenage Mutant Ninja Turtles games, and should appeal to young and old alike. Thankfully, none of the games take themselves very seriously.

. There has also been an anime adaptation, which maintains much of the feel of the original, but only lasted one season in the U.S. Unfortunately, Clover shut down in 2007, and the lead designer is now with another company. Though he's expressed interest in completing his console trilogy, the outlook is grim.

Capcom has not left Joe out to dry, however. After Clover's demise, Joe has appeared as a playable character in Tatsunoko vs. Capcom and then Marvel vs. Capcom 3: Fate of Two Worlds. Regardless of what happens to his home series, Joe has found acceptance in Capcom's stable, ensuring he at least stays visible for the foreseeable future.

Example of:
The Dog Was the Mastermind