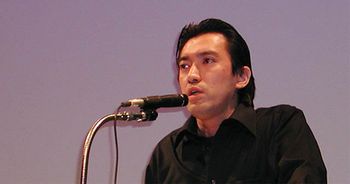 The Man behind Resident Evil.
Advertisement:

Shinji Mikami (born August 11, 1965) is one of the oldest and most well known video game producers, perhaps best known for the creation of Resident Evil. He also made God Hand, and helped create Clover Studio with the help of Hideki Kamiya (of Devil May Cry, Viewtiful Joe, Ōkami and Bayonetta fame) and Atsushi Inaba (who helped out on a bunch of other works, and helped out with MadWorld), now known as PlatinumGames. Originally a Capcom member (one of the oldest, actually), he then went to SEGA with the rest of his fellow Clover members at Platinum Games. He completed Vanquish and worked with Suda51 and Akira Yamaoka on a comedy-horror game titled Shadows of the Damned.

In 2010 he founded Tango Gameworks,

a subsidiary of Zenimax Media (the same parent company as id Software and Bethesda) along with longtime Suda51 collaborator Masafumi Takada.

List of game titles Mikami has worked on as director or producer:

His works frequently contain examples of the following: