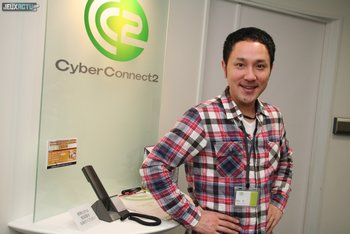 Hiroshi Matsuyama is the CEO of CyberConnect2. He and his company specialize in anime licensed games, Particularly the Naruto franchise (and more recently, JoJo's Bizarre Adventure) though more often then not, they tend to be on the better side of the spectrum then most others, and has occasionally produced and directed original properties (Most notably the .hack Conglomerate and Asura's Wrath). His style of game developing is noted for being highly cinematic, yet interactive, especially as he and his company started making not only games for the Seventh Generation of consoles, but also expanding to movie development with the creation of the Sub-studio Sensible Art Innovation, with LieN (Chikayo Fukuda) to compose the music for all of his games.

He is credited as director and head producer for the following projects (Which can be found on the CyberConnect2 page as well):

Games and other entertainment he admires:

Tropes that he utilizes in his projects, as well as what tropes he expresses himself, include: