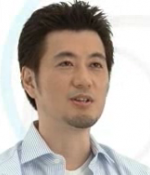 Yasumi Matsuno (born 1965) is a game designer who started out at a small company named Quest, then got bought out by Squaresoft, then left to join Level-5. He has a long working history with Hitoshi Sakimoto for the music and Akihiko Yoshida for the artwork, and is friends with translator Alexander O. Smith. He is basically responsible for the Ivalice Alliance as well.

He has directed the following:

He has also been involved with:

Tropes that frequently appear in his works: