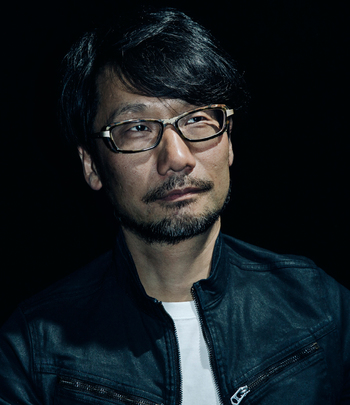 The Man Who Trolled The World.
"When you actually play my games, I don't want people to play them just for fun, or because they have nothing else to do. I want the players to find something more, to enrich their lives through games."
— Hideo Kojima, Metal Gear Solid 4 Making of
Advertisement:

In his youth, Kojima developed a strong interest in film. His parents were quite found of European cinema, especially Westerns and horror, and had a family tradition of watching a film together each night (with Kojima not allowed to go to bed until it had finished), and never really imposed any limits on what films their children were allowed to watch. Kojima would later proudly proclaim that "70% of [his] body is made of movies".

As a teenager, Kojima tried his hand at writing novels and wound up writing several "short" stories and sending to various publications. However, none of them were ever published as his stories often exceeded 400 pages.

Kojima's creative career properly kicked off in 1986, when he joined entered video game publisher Konami (doing so because it was the only games developer listed on the Japanese stock exchange). By Kojima's own admission, he became involved with video games because he was not able to enter the movie industry. His works feature frequent discussions about science, history, politics and culture as well as shameless references to films — primarily American action movies, of which he is a huge fan. His games often glorify, deconstruct, reference, or pastiche Hollywood tropes — from theme naming his cast after movie characters to copying action sequences motion-for-motion. Most of his stories fit into the category of Magic Realism, featuring Humongous Mechas and magical Super Soldiers within the context of real-world settings and events.

Kojima is also dedicated to giving his games an utterly enormous level of world detail in terms of character backstories, politics, history, culture, and science. As a direct result, his games feature so much information that it is almost impossible to find every bit on a first playthrough, starting with an absolutely gigantic in-game encyclopedia detailing the world of Snatcher, and carrying on throughout the Metal Gear series.

Kojima's games, especially in the Metal Gear series, feature a lot of characteristics uncommon in non-sandbox video games. They do not feature levels or missions, but a single location (like a military base or a large jungle) where all of the story takes place. The games prior to Metal Gear Solid: Peace Walker also mostly consist of cutscenes and static dialogue, with gameplay often taking up only a minority of each game's length.

He also constantly tries to surprise the audience. Each game of his features heavy plot twists and when he makes trailers, he often edits objects and characters out of certain footage and re-arranges scenes and dialogue to create a misleading impression. For example, all trailers for 2001's Metal Gear Solid 2: Sons of Liberty famously edited Raiden (the game's Contrasting Sequel Main Character) out of every scene he appears in and replaced him with Solid Snake, to hide the now-infamous change in protagonists that occurs after the prologue chapter.

Kojima is also known for never talking about his stories in-depth. He often says that his stories are anti-war, yet his protagonists are regularly sent on military missions with noble goals, such as preventing a nuclear catastrophe. He also states that he never aims at writing a complex storyline, yet his plots involve a great deal of real life information that he painstakingly researches, and they always pose deep philosophical and cultural questions that characters may spend the entire game discussing. Kojima also states that he wants people to think about his stories for themselves, which might be the reason for him making such contradictory statements.

In 2015, he and Konami had a massive fallout that resulted in Silent Hills being cancelled, his name being removed from the cover of Metal Gear Solid V: The Phantom Pain, and Kojima being prohibited from being involved in any publicity for Konami products. After his contract with Konami finally expired on December 15, 2015, Kojima established his own independent game studio and entered a partnership with Sony. At E3 2016, he revealed footage and the official title of the first new game produced under his partnership with Sony: Death Stranding.

In 2020, he is set to receive a BAFTA Fellowship for his artistry and contributions to the video game industry.

Kojima has written and directed the following games:

As an employee of Konami

With the first incarnation of Kojima Productions

As an independent developer

He has also been involved in the production of:

to further reach out to his fans. The content is mostly all over the place, ranging from food to events in Tokyo to movies to the video game industry from his point of view. The videos are uploaded monthly and are in Japanese but with English subtitles. However, they have since slowed down, presumably due to Death Stranding going into full production. In the latest episode (the first in almost half a year), Kojima-San mentioned that he was even considering ending the series due to his very busy schedule.

Tropes he has personally stated he despises:

Some films that have inspired his work:

Some other things he is known to admire: