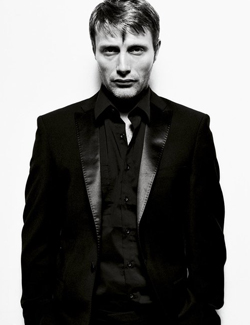 "There is a tendency to underestimate the power of what we can do without words. Sometimes you can make a scene even more powerful and precise without dialogue."

Quite popular back in his home country before he reached international stardom, having been voted Denmark's sexiest man multiple times. Before he became an actor, he was a trained gymnast and later a professional dancer, having done the latter for almost a decade. He turned to acting when he wanted to pursue the more dramatic side of expression. He is the younger brother of Lars Mikkelsen, who has similarly managed to carve out some international fame.

He made his film debut in Nicolas Winding Refn's directorial debut in the Danish crime drama Pusher, and later reprised his role in Pusher 2. His role as Cowboy Cop DI Alan Fischer on the Danish Cop Show, Rejseholdet, significantly raised his star in Denmark. His first Hollywood debut was as Tristan in the 2004 movie King Arthur, but internationally he's probably more well known for his role as the villain Le Chiffre from 2006's Casino Royale, and his portrayal of Hannibal Lecter in the TV Show of the same name. Outside of Denmark, or rather in Hollywood, he also more well known for playing villainous or very anti-heroic characters, but in most of his other films he's played a variety of other characters, from cheerful, low-level gangsters to harrassed, mournful everymen. In November 2020, Warner Bros. announced that he had been cast to take over the role of Big Bad Gellert Grindelwald for the Fantastic Beasts franchise starting with the upcoming currently untitled third film.

Contrary to most English-speakers' assumptions, Mads isn't pronounced "Madz", as the d in his name is silent. In interviews, he's clarified that the closest pronunciation is either "mess" or "mas" (as in "Thomas").

Tropes appearing on his works: