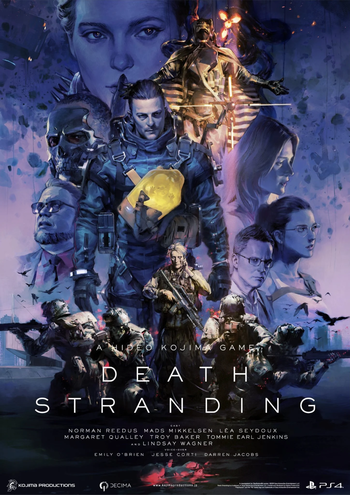 Death Stranding is a game developed by Kojima Productions and published by Sony Interactive Entertainment for the PlayStation 4 and 505 Games for the PC. It is the first game Hideo Kojima has developed since leaving Konami in 2015 and the first fully non-Metal Gear game he's directed since 1994's Policenauts.note Excluding P.T. The game was released for the PS4 on November 8, 2019 with a PC release on July 14th, 2020.

The game stars Norman Reedusnote Who was also set to star in the ill-fated Silent Hills project as Sam Porter Bridges, a courier in a post-apocalyptic United States following "the Death Stranding", a cataclysmic event that altered the rules of life and death. Cynical and jaded from years of criss-crossing the dangerous wilderness of the east coast, Sam is contacted by his estranged mother, Bridget Strand, the President of the United Cities of America.

On her deathbed after years battling cancer, she asks Sam to help fulfill her dream of reuniting the nation through the Chiral Network, a massive digital system that when completed will allow instantaneous communication between the isolated city-states of America. While initially reluctant, an impassioned plea from his sister Amelie (and some... prodding from the government) changes his mind. And so, Sam sets out on a journey across the continent, working to win the trust of America's disillusioned populace and bring hope to a nation that's lost its way.

The game is a post-apocalyptic sci-fi stealth-action-horror-sandbox-simulator title with online co-op elements, running on Guerrilla Games' Decima engine. As a courier, the player must find ways for Sam to carry his cargo — a backpack and floating carriers — through a dangerous environment, and retrieve them if they are lost. He faces various environmental hazards both mundane and fantastic; the beautiful wasteland he navigates is full of steep mountains, sheer cliffs, rushing streams, thieving bandits, shadowy eldritch creatures which hunt by sound, and the "Timefall", a strange rain that induces Rapid Aging in anything it touches.

The game has an official novelisation, written by Hitori Nojima (one of the game's co-writers, Kenji Yano's, pen name), that was released in two parts on February 23rd 2021, with the English translation done by Carley Radford. It's a re-telling of the game's story that focuses mostly on the characters' psychology and expands their backstories.

open/close all folders
A-M
N-Z
... An explosion that will be our last.
Feedback

The Beached Things (or "BTs") are ghostly things that manifested on Earth after the Death Stranding.

The Beached Things (or "BTs") are ghostly things that manifested on Earth after the Death Stranding.