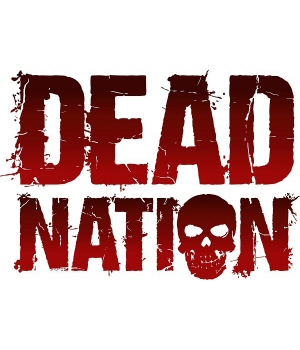 "I don't know why I was special, and I didn't care."
— Jack McReady or Scarlett Blake on his/her immunity
Advertisement:

Dead Nation is a Shoot 'Em Up for PlayStation 3 developed by Housemarque. It was released on November 30, 2010 in North America, and December 1 in Europe, on Play Station Network

It's Next Sunday A.D. following a global viral epidemic and subsequent mass rising of the dead. Two survivors, Jack Mcready and Scarlett Blake, are trapped in an overrun city, they've just run out of food and water, their last barricade has been destroyed by the zombies, it's dark, and Jack's wearing sunglasses. It's time to make a break for it. Luckily for them, they're immune to the infection.

Players control Jack and/or Scarlett from a top-down third person view not unlike Nation Red and many other zombie shooters. In each level they must navigate a linear route filled with zombies, stuff that explodes and other hazards. Along the way they can salvage armor and ammunition, as well as cash to use at weapon vendors in safe areas. You'll have large showdowns with hordes of zombies and super zombies before reaching the level exit.