"The zombie genre has died. We're bringing it back from the dead."
— The developers on their website 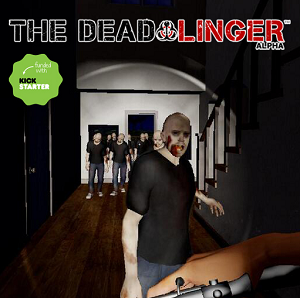 That's not a situation you want to find yourself in!
Advertisement:

The Dead Linger is a survival horror game made by Sandswept Studios which is currently in its Alpha stage, but can already be bought and downloaded from the official website

. It is set in a place simply called "Everywhere, USA" during the zombie apocalypse. You as the player assume the role of someone who was luckily spared by the virus. But remember: You are not immune! So, what do you have to do?

Whatever the heck you want, of course!

Naturally, you're trying to survive the onslaught of undead and you're also going to have to find food. And guns. And shelter. Also, you have an almost endless, procedurally generated world in front of you to explore. A world filled with interesting places, potent weapons, dense forests, abandoned farms and hunting lodges...and zombies, of course. Lots and lots of zombies.

With the game still in Alpha, there are of course some limits to what one can do in the world of the lingering dead. But if the devs can implement all the things they're planning

, there's a very real possibility that it can achieve its goal of becoming the definitive zombie survival experience.

As of November 2015, the game is officially cancelled, due to the lead designer's failure to pay the development team. Though the game's Twitter page insists it could be brought back at some point, for now this can be considered Abandonware.

The Dead Linger contains examples of: