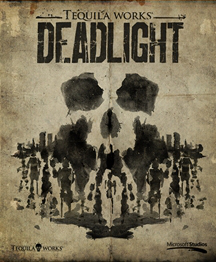 Randall Wayne is a 30-something ex-park ranger, living a simple but comfortable life in 1980s Canada with his wife and daughter. And then the Shadows came.

Deadlight is a 2D Cinematic Platformer utilizing the Unreal engine released in August, 2012 on Xbox Live Arcade. With a focus on navigating the ruined city of Seattle and avoiding the shambling undead (rather than out-and-out fighting them), the player leads Randall through the streets, city, suburbs and sewers, all the while fleeing from the hordes of "Shadows" and the men of the sinister "New Law" organisation...

The game consists of puzzles which the player must solve as he attempts to avoid the many Shadows he encounters. Players are advised to avoid Shadows as much as possible, and try not to engage them in combat. There are only a small number of occasions when combat is completely necessary however, and throughout the game, the emphasis of the gameplay remains strongly on avoiding Shadows, not confronting them.