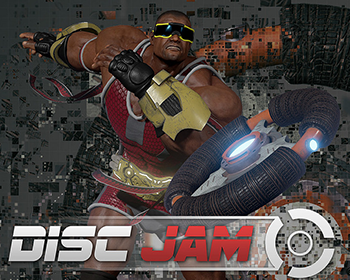 Disc Jam is a Party Game with a sports theme, developed by High Horse Entertainment and released for Playstation 4 and Microsoft Windows PCs on March 7th, 2017, then ported to Nintendo Switch on February 8th, 2018.

The titular game is a unique futuristic sport that uses a hi-tech disc, tossed between the players with rules that mix air hockey with tennis. It is played in 1 vs. 1 or 2 vs. 2 matches with up to four players, either locally or online. There's also a roster of six distinct characters for the players to choose