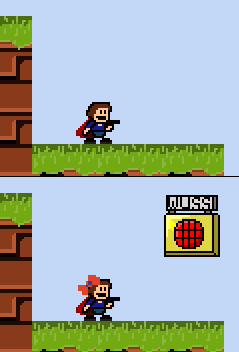 Above: Hard Difficulty.
Below: Medium Difficulty.
File Not Found: Easy Difficulty
Low Threat Construct: Die in the name of the Evil Wizard!
Nameless One: What evil wizard are you talking about?
Low Threat Construct: Uh...the one that doesn't exist until you set the Rubikon Dungeon construct to *hard* difficulty level. Boy, will you be in trouble then.
— Planescape: Torment
Advertisement:

Easy Mode Mockery is where the game radically changes when you play on easier difficulties. There are two ways to go about this:

The Serious Way: You cannot unlock extra gameplay modes or features on the easier difficulties. The game may also end early or not give you the best ending. This is to prevent you from just unlocking all the extras on the easiest levels and then ignoring the main game.

The Humiliating Way: The game turns ridiculous in one way or another on easy difficulties. For example, all the enemies turn Super-Deformed and your weapon becomes a broomstick.

Now a lot of these "mocking" endings are worth seeing at least once, and in a few cases (most notably Guitar Hero 2 and Rocks The 80s), you actually get rewards from the easiest difficulty you can't get any other way. However, this is cold comfort to those people who really cannot just "practice and get better", such as those with disabilities, and do not appreciate a game making fun of them for something that is entirely out of their control. Even a sizeable number of able gamers wouldn't appreciate how they have to forcefully repeat whole game content just to see the difficulty-locked content, stages, or endings. The increasing number of game developers acknowledging that there are gamers who are unable to play on harder difficulty settings along with the desire to appeal to more casual gamers has pushed such mockery into being a Discredited Trope.

Attempts to mitigate this trope varies from not having an easy difficulty altogether, giving various gameplay mechanics to ease the player before the inevitable Difficulty Spike, or instead of locking story or stage, just add score multipliers, or achievements and unlockable wearables exclusive to the completion of the harder difficulties.

Related to Idiosyncratic Difficulty Levels, where the names of the easy modes often contain taunts. Another related trope is Hints Are for Losers, which is when the game mocks or penalizes the player for trying to use hints. Compare No Fair Cheating, where making the game easier through cheats is discouraged. For some cases where Easy Mode Mockery is provided by other players, see "Stop Having Fun" Guys. Subtrope of Earn Your Fun.

Contrast Hard Mode Perks, where the game achieves the same result by rewarding you for choosing harder difficulties.

Games featuring a Story Difficulty Setting frequently avert or even invert this by framing the easiest setting as a perfectly valid way to enjoy the game, though this doesn't always mean this trope isn't present either.

May involve Achievement Mockery as well. Not to be confused with Completion Mockery, which makes fun of you regardless of the difficulty.