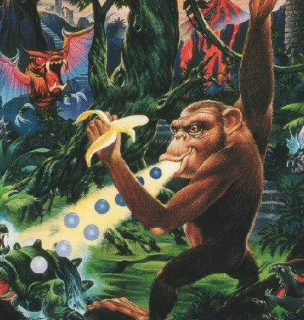 Going Ape Spit.
Toki (original title JuJu Densetsu, "JuJu Legend") was an arcade Platform Game made by TAD Corporation in 1990, that never received any sequels but was ported to a few systems a short time later. It is a simple little game, that was well received and still remembered to this day in Retro Gaming circles.
Advertisement:

The Excuse Plot tells the story of a tribesman, Toki, whose girlfriend Miho was kidnapped by the evil witch doctor Vookimedlo, who also turns Toki into a cartoonish little chimp. Toki then has to fight through five dangerous environments and Vookimedlo's lair to regain his love and humanity. Luckily, the transformation gave him the ability to spit energy globes from his mouth, that are also his main weapon.

A remake of this game has been released in 22 November of 2018 for Nintendo Switch, and for PC through Steam on 7th June, 2019. You can see the trailer here

. Meanwhile, the original game can be played in a browser here

Not to be confused with the 2001 game Toki Tori.

Tropes that can be found in Toki:

After you finish the game, you will see in the credits the name of every enemy you faced throught Toki's adventure

After you finish the game, you will see in the credits the name of every enemy you faced throught Toki's adventure