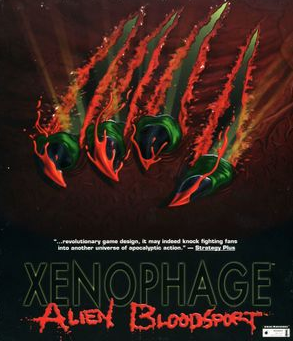 Because of the aggressive tendencies shown by your semi-sentient species, the Council has bestowed upon you the honor of relieving their boredom by fighting for the propagation rights of the species of your world.
The combat will be weaponless. The matches will take place in a holographic simulation of you or your opponent's homeworld, and will be farcast to the Council Chamber.
If you fight well enough, you will be given the honor of defeat at the hands of the Grand Champion.
Failure to fight will result in automatic forfeiture of propagation rights.
—The announcer, from the game's Opening Narration
Advertisement:
Oh, no...
—Nick, in response to the above

Xenophage: Alien Bloodsport is a fighting game written for DOS, by Argo Games, and published by Apogee Software (now 3D Realms). It was originally released as shareware, but has been freeware since 2006.

You choose one of eight characters of various alien races (including two humans) and fight the other characters (as well as three boss enemies) for the amusement of a mysterious alien council; the winner doesn't get their home planet blown up.