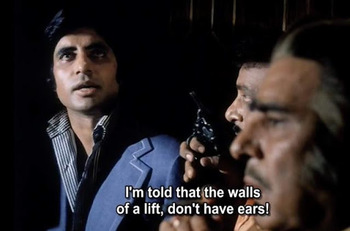 Vijay explains why they are meeting in a lift

When you need to discuss something in private but are in a crowded building full of folks that could work for the Big Bad or something similar, there's only one location that is present in most structures that can offer solitude to you and your associate. So the two of you hop into the nearest elevator, wait for the doors to close and BAM — instant perfectly secure and private conference. Or alternatively, it's just to get some sexy times. Often, the emergency button is pressed to buy the characters some extra-time. No one ever faces consequences for this. Ever.

This is now a Discredited Trope since, after the 80s, elevators no longer contain passenger-operated emergency stop buttons. This is because there are virtually no situations where the occupants of an elevator car would benefit by stopping the unit between floors, and the buttons were mostly misused for this trope's purpose. In modern times, elevators also typically contain a security camera, preventing them from being the private haven they once were.

On the other hand, if you are in an elevator with someone you want to talk to, you have a captive audience for a very short while, allowing you to briefly present your ideas in what is known as an Elevator pitch.