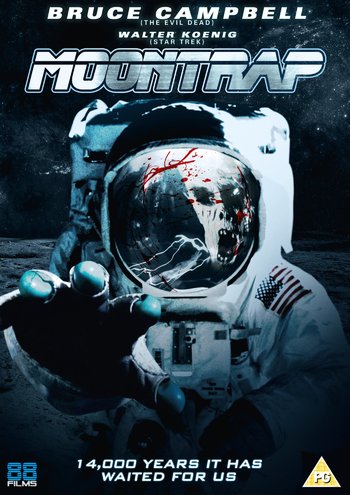 " We don't take shit from a Machine."
Advertisement:

While on a Space Shuttle mission, Colonel Jason Grant (Koenig) and Ray Tanner (Campbell) find an unidentified spacecraft in Earth orbit and investigate. It contains a strange alien artifact that they bring back to Earth, which quickly assembles a killer robot out of spare parts lying around and goes berserk, killing at least one lab tech before they can break it apart.

Did we mention that they somehow know this artifact comes from the moon, 14,000 years ago?

Col. Grant digs up the last unfired Saturn V launch vehicle and throws together an impromptu lunar mission. However, the aliens who built the artifact quickly capture him and trap him in a jail cell with a hot alien space babe. He eventually outsmarts the aliens, blows up their base, and saves the day.