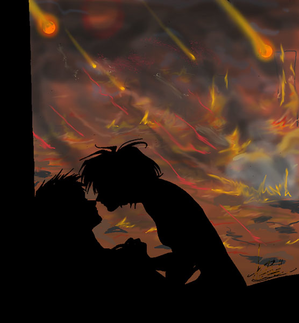 When the World Ends

Boy: We've got to get out of here, babe. There's a psychopath on the loose!
Girl: Don't you want to bone one last time before you die?
Boy: Definitely!
[Both scream as psycho attacks wielding four flame-sprouting chainsaws]
— Danger 5, "Johnny Hitler"
Advertisement:

Knowing that they are about to face the final battle or some other potentially deadly or at least terrifying experience, two people finally consummate their affair. More loosely, it can be any character or characters having sex before some climactic moment in the story.

If at least one of the characters in question is a virgin, then the subtrope Must Not Die a Virgin applies, as an additional sense of urgency is present.

If one of them is then killed during the final battle, there's a good chance the heroine will be left with Someone to Remember Him By.

In Real Life, sex before strenuous or stressful activity is usually not encouraged because of the energy that sex supposedly uses up (this is especially true in the world of sports, where athletes often believe that having sex the night before a game will negatively affect their performance). There is no scientific evidence for this. There is even a contrary theory suggesting that the hormone surge could improve subsequent performance. Even so, sometimes Truth in Television: natural selection in the tribal days may have encouraged an instinct for such conduct because those who have sex before battle are more likely to reproduce and leave descendants than those who don't.

The reverse case, where the sex comes as a celebration of the fact that both characters survived whatever it was, is Glad-to-Be-Alive Sex. If they not only survived the battle but emerged victoriously, it's Victory Sex.

Has nothing to do with Ending Fatigue.