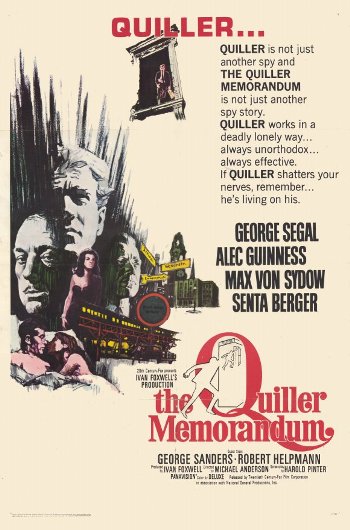 They know they've got to look for the man who stands facing the wrong way in a bus queue to show he doesn't really want a bus, the man who always wants the window open when everyone else wants it shut, the awkward fellow who's going to kill himself one day trying to prove he's bullet-proof. And if they want him for a dirty, rotten, stinking job that he'd normally throw back in their faces, all they've got to do is tell him that everyone else has refused it.
Advertisement:

Quiller is the first-person protagonist of a series of espionage novels by English-born author Elleston Trevor, writing under the pen name of Adam Hall. He is a shadow executive (secret agent) for the Bureau, a 'deniable' British intelligence agency reporting directly to the Prime Minister.

One of the books, The Berlin Memorandum, was adapted by director Michael Anderson and screenwriter Harold Pinter into the 1966 film The Quiller Memorandum. George Segal starred as Quiller, and the cast also included Alec Guinness, Max von Sydow, Senta Berger and George Sanders. There was also a short-lived BBC-TV series in 1975.

The books include the following tropes: