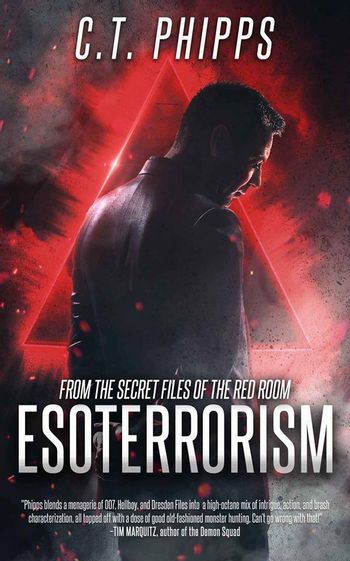 There are no good guys in the world of shadows...but maybe some bad men are better than others.
The Red Room is an Urban Fantasy series by C.T. Phipps and published by Crossroad Press. It is part of the The United States of Monsters universe.
Advertisement:

The series follows Derek Hawthorne, a Man In Black member of an Ancient Conspiracy known as the House which is devoted to upholding The Masquerade. Thinking about retirement, but never quite getting there, Derek is joined by his succubus partner, Shannon O'Reilly, as they work against Eso-Terrorists or supernaturals who are attemtping to reveal the supernatural to the public. Gray-and-Gray Morality abounds as the two sides are both shown to have legitimate points.

The books were originally a standalone series but have since been Retcon-ed as a tie-in to the The United States of Monsters. This means the series that originally took place in 2015 were retconned as taking place in 2006, two years before the Broken Masquerade in 2008.

Not to be confused with the ghost story

open/close all folders
The Series
Esoterrorism
Eldritch Ops
Advertisement:
The Fall of the House