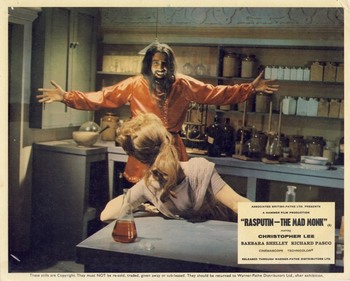 Rasputin the Mad Monk is a 1966 film directed by Don Sharp. It was released by Hammer Film Productions.

It's about, uh, Grigori Rasputin aka "the Mad Monk". In this version Rasputin (Christopher Lee) is a hard-drinking, hard-partying mystic Russian peasant who seems to have some sort of faith-healing power, as shown in the opening sequence where he heals an innkeeper's wife who is dying of fever. Rasputin gets in some trouble with the local authorities after trying to rape a girl (and slicing off her boyfriend's hand in the ensuing fight), so he heads off for St. Petersburg, capital of Tsarist Russia.

He's also got the power of hypnosis, which serves him well when he meets one Sonia (Barbara Shelley), lady-in-waiting to Tsarina Alexandra. Sonia is usually busy taking care of Tsarevich Alexei, heir to the throne, who suffers from hemophilia. Rasputin, who is quite evil, uses his hypno powers on Sonia to get her to cause Alexei to have an accident. Then Sonia recommends a healer she just happens to know, one Grigori Rasputin. In this way Rasputin gains entrance into the royal court, and control over the emperor's wife.