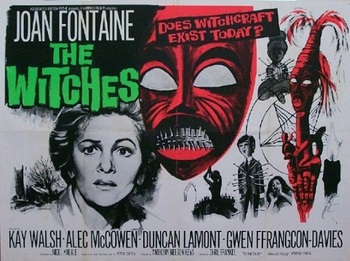 The Witches is a 1966 Hammer Horror film directed by Cyril Frankel, starring Joan Fontaine in her final cinematic role.

She plays Gwen Mayfield, a former missionary in Africa — who was driven out by the native witch doctors. After she has recovered from her breakdown, she's asked to act as the headmistress for a school in Heddaby, a quaint little town in the countryside. Ms Mayfield is happy with the town at first... until she notices some curious behaviour from a lot of the locals. Particularly towards one of her students: 14-year-old Linda Rigg. Ms Mayfield is determined to find out the mystery of the town, even if it means confronting some sinister inner demons.

Not to be confused with the Roald Dahl novel of the same name. Or its 1990 or 2020 film adaptations.