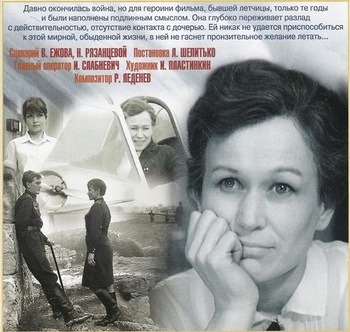 Wings is a 1966 film from the Soviet Union, directed by Larisa Shepitko.

Nadezha (Maya Bulgakova) is a middle-aged woman living a dull, uneventful life as principal of a Soviet vocational school. She finds the educational work uninspiring, especially when she has to dismiss a smart-ass student, who only sneers at her in return. She has a daughter, Tanya—but she and Tanya are estranged, to the point that Nadya hasn't even met her new son-in-law Igor. She is engaged in a relationship with Pavel, a museum curator, but that is unfulfilling as well.

Nadya can't stop thinking about the most fulfilling time in her now boring life: when she was a fighter pilot in the Great Patriotic War. She remembers not only the freedom and joy she felt while flying, but her old lover Mitya, a fellow fighter pilot who was shot down.

Feature film debut of Shepitko, who had just graduated from Soviet film school. One of only four feature films made by Shepitko before her tragic death in a car accident at the age of 41.

Not to be confused with the 1927 film Wings, about World War I fighter pilots.