Film / The Wild World of Batwoman 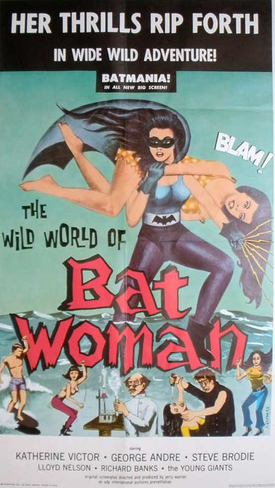 The Wild World of Batwoman is an American science fiction superhero film directed by Jerry Warren (not to be confused with another incompetent director named "Warren"). The film stars Katherine Victor as Batwoman, George Andre as Professor G. Octavius Neon, and Steve Brodie as Jim Flanagan.

With the popularity of the Batman (1966) television series, director Jerry Warren decided to make his own bat-focused superhero film. After being sued for copyright infringement, Warren re-released the film under the title She Was a Hippy Vampire. Like Warren's other films, it's seen by modern critics and filmmakers as almost watchable. Almost.

The film's Cold Open features two so-called "Bat Girls" initiating a third by giving her a Dick Tracy-esque wrist radio and making her drink a red concoction which turns out to be a smoothie (because they're only "synthetic" vampires). Note that this prologue was filmed and added to the movie only after the aforementioned lawsuit; therefore, the three girls vanish from the rest of the movie.

Meanwhile, other Bat Girls are busily patroling the city, and one particular Bat Girl is kidnapped from a nightclub filled with her dancing colleagues. This Bat Girl, it turns out, is to be used as a bargaining chip by Mexican wrestler cum supervillain Rat Finknote Not to be confused with the titular character of Rat Pfink a Boo Boo by The Incredibly Strange Creatures Who Stopped Living and Became Mixed-Up Zombies auteur Ray Dennis Steckler, to coerce Batwoman into helping him steal an atomic-powered listening device. But Batwoman insists on personally verifying the girl's safety first, and Rat Fink complies, allowing Batwoman to rescue her and not have to commit the crime.

Now aware of Rat Fink's designs on the Atomic Hearing Aid, Batwoman alerts the device's manufacturer and arranges for her Bat Girls to guard the device until such time as it can be disposed of. But Rat Fink's goons infiltrate the company's office building using Paper Thin Disguises and drug everyone, allowing them to steal the device and kidnap that same Bat Girl again by the young Mook who has fallen in love with her.

Batwoman follows up her failed guard duty with a failed seance, then with a failed search of the nearby beaches — during which all her Bat Girls are kidnapped and taken to Rat Fink's Elaborate Underground Base (where he keeps his Mole People). But Batwoman had anticipated this (somehow) and has followed him here.

The film doesn't end here, but this summary does. Because words simply cannot describe the sheer goofiness of that climactic fight scene. Or the Dénouement afterwards. But, if you're brave, you can read for yourself, here

Not to be confused with Batwoman, a DC Comics character. Though, obviously, that's what the producer was hoping for.