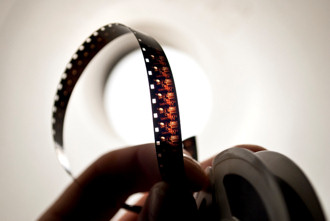 An insert of an insert.
A close-up shot of hands, a document, a murder weapon, and so on. Cut into a scene to appear part of the continuity, but probably shot separately. The hands often don't belong to the actor in the scene.
Advertisement:

If the hands are effecting a murder, they are Hands of Death. Especially if clad in black gloves. When it's the director doing this, it's an Insert Cameo.