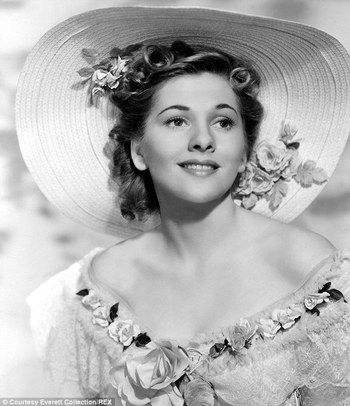 She was born in Tokyo, to British parents. (Her cousin was Geoffrey de Havilland, the aircraft designer.) When she was only three years old, her mother and her father separated; Lillian de Havilland took Joan and her older sister Olivia to the United States. Lillian de Havilland later married a man named Fontaine so, when Joan signed a contract with RKO at the age of 18, she took the Stage Name of "Joan Fontaine" to avoid confusion with her sister, also a film actress. Minor film roles came throughout the decade, with the most prominent being a part as the Love Interest for Fred Astaire in A Damsel in Distress (1937).

In 1939 she got a part as one of the divorcees in The Women. Fontaine got her big break in 1940 when she won the starring role opposite Laurence Olivier in Alfred Hitchcock's Rebecca. This vaulted her to the Hollywood A-list. The next year she won the Oscar for another Hitchcock film, Suspicion. Fontaine's Oscar was the only Academy Award ever given to an actor in an Alfred Hitchcock film; among the competitors she beat was her sister Olivia in Hold Back the Dawn.

Fontaine starred in a series of mostly costume dramas and romances throughtout the 1940s and 1950s. She preferred working with directors whose work she admired. She insisted on working with Max Ophuls on Letter from an Unknown Woman (which she considered her best work) and also worked with Fritz Lang and Ida Lupino. Her last film was The Witches in 1966, but she worked on stage and in television for another thirty years before she finally retired. As noted above, Fontaine was the sister of another Oscar-winning actress, Olivia de Havilland. The two of them formed the most famous case of Sibling Rivalry in movie history (see this famous photo

◊ of Olivia blowing off Joan after Olivia finally won an Oscar in 1947.) The two sisters had a final falling-out after their mother died in 1975 and did not speak to each other ever again. Joan was survived by Olivia for nearly seven years. However, they remain the only siblings to have won best acting Oscars.

This actress' work features examples of: