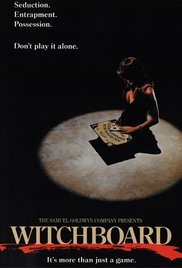 Witchboard is a 1986 Horror film written and directed by Kevin S. Tenney.

At a party hosted by Linda, everybody plays with a Ouija board brought by her friend Brandon. They actually manage to contact a spirit. She fails to follow the instruction to not use the Ouija board alone, and soon finds out that the spirit she was talking to was manipulating her the whole time, and wants to control her body to walk the Earth once more.

Got two sequels, The Devil's Doorway and The Possession, respectively released in 1993 and 1995.