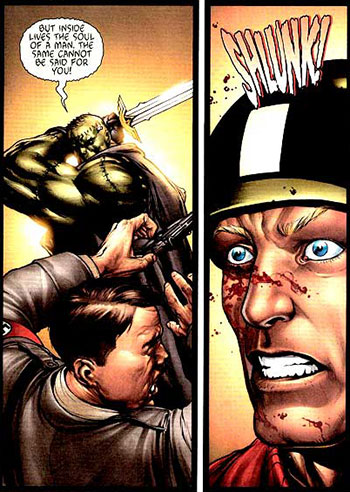 In real life, Hitler was not killed by Frankenstein's Monster. note After all, the Swiss were neutral.
"Goldstone has succumbed to a temptation felt by other authors: the temptation to construct his counterfactual scenario by finding someone to kill (or, one might add, not to kill)."
— Carla Gardina Pestana (a historian discussing another historian's work

In a work of fiction based on a true story, sometimes a Historical Domain Character is killed off in a way which departs drastically from his or her passing in real life. This may be justified if the work is a Secret History or Alternate History; otherwise, it's a rather flamboyant example of Artistic License – History. Top marks if the fictional death differs notably in terms of both cause and date.

Note that this trope doesn't cover instances where the death is altered, but is still ultimately recognisable as a fictionalization of the real death. For example, the Hammer film Rasputin the Mad Monk makes some notable changes to Rasputin's historical murder, most obviously replacing his actual assassins with fictional stand-ins and having Rasputin successfully kill some of them before going down, but the sequence is still broadly similar to the accepted account.

The inversion of this would be when a historical figure's death doesn't take place when it did in real life - either because the story depicts their historical death as being faked or otherwise misreported, or when it simply avoids the matter altogether.

Essentially this is the Based on a True Story version of Death by Adaptation or Dies Differently in Adaptation (or Spared By Adaptation, for the inversion).

Compare Real Event, Fictional Cause. See also Celebrity Casualty, where a fictional version of someone who's still alive at the time of production gets killed off.

As a Death Trope, expect unmarked spoilers ahead.