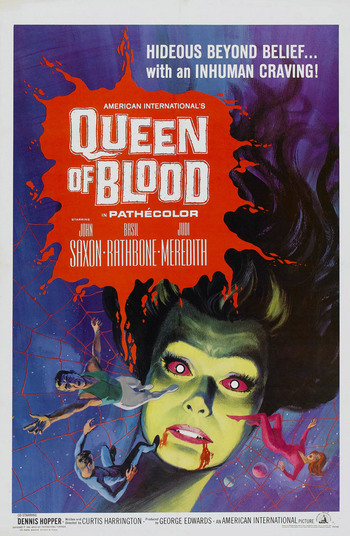 Queen of Blood, aka Planet of Blood, is a 1966 color Sci-Fi Horror film produced by George Edwards and Samuel Z. Arkoff, directed by Curtis Harrington, and starring John Saxon, Basil Rathbone, Dennis Hopper, and Judi Meredith. The film is based on the screenplay for the earlier Soviet feature film Mechte Navstrechu ("A Dream Come True"). Director Harrington reused special effects footage from that film, as well as the Soviet sci-fi film Nebo Zovyot (Battle Beyond the Sun).

An alien species contacts Earth to say that they are coming across the galaxy to make formal contact. Their interstellar starship crashes on Mars and an Earthship is dispatched to attempt a rescue. On Mars, they locate the downed craft, but only a single dead alien humanoid is found aboard. They determine that an alien rescue shuttle left the Red Planet but crashed on nearby Phobos. A strange, green-skinned woman is found alive aboard the wreck. As they head back to Earth, the crew begins to die, drained of their blood.