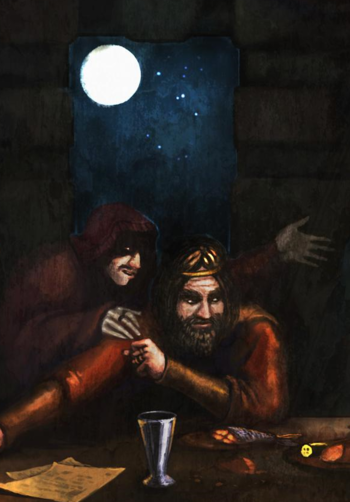 "Sire, he has a pair of twos."
Wooster: What exactly does the term "Master spy" mean in this part of the world, anyway?
Krosp: Hmm... "Sneaky gossip-monger"?
Wooster: That explains so much.
— Girl Genius
Advertisement:

The Handler of handlers, moving spies about all over the world. He is easily made a villain because this role lends itself to deception, morally questionable decisions and a We Have Reserves mentality. Though sometimes a spymaster can be an anti-hero, feeling The Chains of Commanding and considering The Needs of the Many. Thus, he is typically cold and dour, though sometimes he has a heart of gold. If rebellious or wildly anti-heroic protagonists work for him, he may have a long-suffering air, as he's the one who has to deal with many of the consequences of their hi-jinx.

Few viewpoint characters are Spymasters because the role is basically office work: sitting at a desk, writing letters, reading reports, etc. It's hardly exciting; The Protagonist is more likely to be a field agent reporting to him because that is where "the action" is. Thus, he is more likely to be the Big Good if he's working with The Hero.

He is often The Chessmaster.

Compare Knowledge Broker for when the Spymaster is operating freelance.