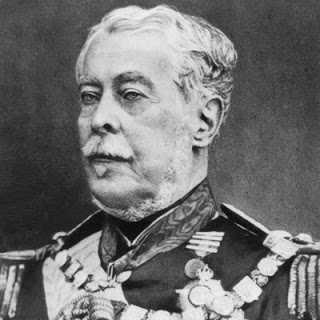 The Peacemaker.
Those who are true Brazilians, follow me!
—The Duke Of Caxias in the Battle of Ytororó as he charged alone against the enemy vanguard
Advertisement:

Luís Alves de Lima e Silva, better known as The Duke of Caxias (25 August 1803 – 7 May 1880) is, without a doubt, the most famous and most celebrated military man in the history of Brazil (and a Folk Hero of sorts in these parts).

Duke of Caxias began his military career very early, or in more precise terms becoming cadet at the age of five, in accordance to his father's will to make a military man out of him (He succeeded).

Young Caxias would have continued his studying in military school had it not been for one tiny detail: The Brazilian War of Independancy breaking out. Caxias promptly dropped out of school to join the revolution against the Kingdom of Portugal. In this war the legend of Caxias would begin to rise: Known for his daring attacks that caught the Portuguese by surprise (including a literal uphill battle bayonet charge), bravery in battle and genius in the battlefield, he was widely respected by the age of twenty.

In this same period he was chosen to be part of The Emperor's Guard, an elite regiment dedicated to kicking ass wherever the future Emperor Pedro I of Brazil needed them. Speaking of Emperor Dom Pedro I, first Emperor of Brazil, his reign would soon prove to be troubled: Within less than ten years, a rebellion would erupt claiming for his abdication. Caxias' father sided with the rebelled, but Caxias was one of the few who sided with the Emperor, against his father's very will.

Seeing a war was about to erupt, Dom Pedro I told Caxias to join the rebelled as he was about to abdicate. Caxias followed his orders, but later clarified that he only did so because the Emperor told him to. Now without an Emperor (as Dom Pedro II, heir to the throne, was only a child), a regeant took the throne. What followed was a period of great political instability, in which several rebellions crawled out of the woodwork.

In this period the future Duke served as swordsmanship and horsemanship tutor to future Emperor II, and they grew friendly and respectful with one another. It was also in this period that Caxias smashed to pieces all of the aforementioned rebellions, earning his first title (Baron of Caxias, named after one of the towns he captured in the first rebellion he crushed, and probably because Caxias sounds like it would be some weird one-word mash-up portmanteau for “kickin’ ass”) after the first one of them was crushed under his boot. Destroying any threats to the national order by his tactical genius, he went on a meteoric rise through the military and political scenario, becoming one of the leading politicians and a very wealthy man. He was known for being implacable in the battlefield, but a skilled negotiator who was merciful to his enemies and fair in times of peace.

, in which he was the mastermind behind the offensive (and susbequent victory) against Argentinian dictator Juan Manuel Rosas. For his deeds he was made Marquis.

The now Marquis of Caxias would retire from the battlefield (being 50 and all) and start a prosperous career in politics after this war, being very influential in the Imperial cabinet and pretty much becoming Dom Pedro II's Number Two and The Reliable One.

...That is, until the War of the Triple Alliance broke out, the bloodiest and most destructive war to ever reach the South-American continent. In such dire situation, the 64-years-old Marquis of Caxias was summoned back to the frontlines. Strangely, his first action upon command was to halt all battles with a temporary truce (so he could improve, train and bring better supplies to the armies).

Then he found himself confronted with a problem: The Paraguyan army built a nearly impenetrable line of defense that would be nigh impossible to overcome. It is then that Caxias executed the Pikysyry maneuver, one of the most daring and creative strategies conceived: He built a road across the hellish swamps of Paraguay that perfectly avoided the line of defense and emerged in the army's rear. The page quote is taken from one of the battles that followed, in which Caxias caught the army by surprise and in a series of devastating victories, crushed the spine of the Paraguayan army.

He returned home as a hero and was finally made Duke. He retired once and for all and continued his political career in peace (peace being a relative term here, as he would participate in several political crisis later in his life). His detereorating health confined him to a wheelchair, and in 1880 he died.