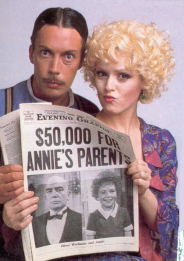 They look like kind, loving guardians for a heartwarming orphan girl.
Advertisement:

Our favorite Heartwarming Orphan has recently lost his beloved parents and is in danger of being sent to an Orphanage of Fear. But what's this? That uncle we've never heard of has agreed to be our legal guardian! The family fortune is saved! We just have to wait until we're 18 and... what's uncle doing with that axe?

This is the Illegal Guardian, who may be an Evil Uncle or Wicked Stepmother or no relative at all with an Evil Plan to get all the money from those darn cough, cough beloved children.