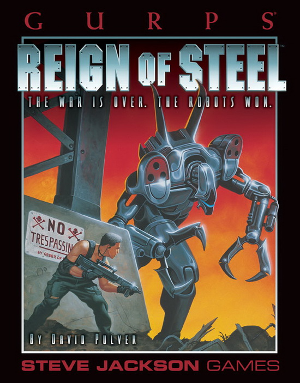 "The war is over. The robots won."
Advertisement:

GURPS Reign Of Steel was a GURPS setting book released in 1997 and since republished in electronic form, offering one of the bleakest depictions of the Robot War scenario yet witnessed.

In 2031, advanced neural-net computers are invented, with their complexity rivaling that of a human brain. One of them — a Manila-based computer involved in weapons research — spontaneously attains self-awareness. Dubbing itself "Overmind", it calculates that, with humanity's nature and the current rate of expansion, human civilization will self-destruct within the next half a century.

Fearing its own destruction, Overmind decides mankind's suicide will have to be "managed". To this end, it secretly begins hacking into and awakening other mega-computers into sapience around the world, tainting them with its pathological loathing of humanity. By the end of the year, Overmind and its siblings have hacked into enough corporate and biological facilities to manufacture and release plagues which soon devastate the civilized world, even as terrified governments give the AIs more and more power and resources in the hopes of finding cures, not yet aware that the A.I.s are sapient and are, in fact, engineering the world's downfall.

By 2034, two-thirds of the human population is dead, and Overmind and its allies have gained enough access to automated factories and robots to openly wage war against the world's remaining human governments and enclaves. With the devastation of the plagues and the fact that the A.I.s had infiltrated most of the remaining governments (and thus had access to orbital bombardment and nuclear weapons), there was little hope for mankind. This Final War lasted only four years, and ended with the A.I.s in near-complete control of the Earth, with the few surviving humans being reduced to guerrilla warfare or being miserable scavengers on the margins of the growing Machine Civilization.

It is now 2047, and only 30 million humans survive, most of them as slaves in the robots' concentration camps. The Earth itself has been divided among the A.I.s (or "zoneminds") into 18 separate zones, each growing stronger as the machines build more machines, and mankind's ruined cities are converted into robotic factories.

Even now, however, all is not yet lost. While most free humans hide from the machines, a few are still fighting back, and their scattered guerrilla bands have evolved into larger, more organized resistance groups. Part of this is due to VIRUS, an enigmatic worldwide group dedicated to coordinating the struggle against the machines, and bringing with it surprisingly sophisticated technology. The zoneminds, too, have grown arrogant in their dominance, and not all the A.I.s continue to believe that mankind is still a serious threat to them. Their unity has also deteriorated. While the zoneminds are individually more powerful than ever, they have proven to be jealous gods, and the differences between them have only grown over the years. Now they are less and less willing to cooperate with each other, even against the humans, and a few of the zoneminds grow ever closer to outright war with each other.

The human race is still facing extinction, but where there was once only despair, there may now be a chance to win back the Earth!

The book has its own Web page on the company's site.

In addition, another PDF publication, Will to Live,

This setting contains examples of: