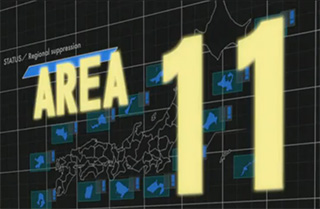 "Area 11... the defeated and once proud nation of Japan was rechristened with a mere number."
"Even the names of the countries, and their shapes on the map, had been different. Airstrip One, for instance, had not been so called in those days: it had been called England or Britain, though London, he felt fairly certain, had always been called London."
— 1984
Advertisement:

So The Empire has conquered a number of unfortunate countries and crushed the citizens under the weight of oppression. But it just isn't enough for The Empire. They've got to rub their newfound authority in the subdued province's face. How best to humiliate them? Take away something they strongly value, something that symbolizes their very identity—their name! The Empire will show how evil they are by re-branding the area with a label and a number. It also adds to the overall military atmosphere of a piece, even though Real Life militaries' very reason for using codes rather than common place names is operational secrecy, and replacing the latter with the former for public use would be missing the point.

Other evil rulers prefer to rename cities after themselves. Compare to Monument of Humiliation and Defeat. See also Please Select New City Name.

For replacing people's names with numbers, see You Are Number 6.