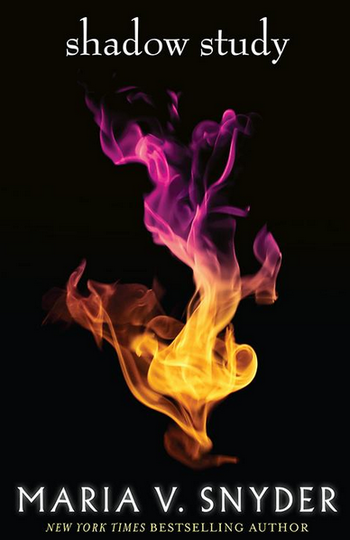 Maria V. Snyder's books take place in the neighboring countries of Ixia and Sitia. Sitia has lots of magic users. Ixia has been taken over by the Commander, who Does Not Like Magic (for good reason).
Advertisement:

The books so far consist of three trilogies:

The "Study" series, narrated by Yelena:

The "Glass" series, narrated by Opal:

In Poison Study, Boxed Crook Yelena is offered the job of the Commander's food taster. She accepts it and is trained by The Spymaster Valek in the identification of poisons. She also picks up some self-defense skills and sneakiness, makes some friends, discovers the Commander's deepest secret, falls in love with Valek, and eventually finds out that she can do magic and was originally kidnapped from neighboring Sitia. At the end of the book, she flees to Sitia, where she later studies magic and learns how to use her skills as an Soulfinder. She eventually becomes the liasion between the two countries.

The "Glass" series picks up four years after the end of Fire Study with Opal Cowan, the glassmaker from that book. She's studying at the Keep in Sitia, but is known as a "one-trick wonder" because the only magic she can do is to insert magic into her glass creations. This talent turns out to be bigger and more useful than she knows.