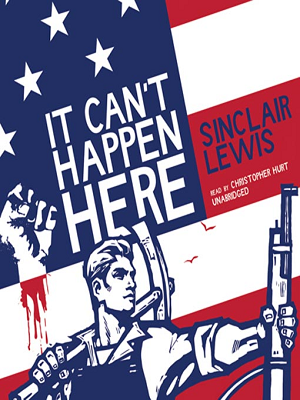 It Can't Happen Here is a 1935 speculative fiction novel written by Sinclair Lewis.

In the novel, the United States succumbs to a far-right totalitarian government headed by President Berzelius "Buzz" Windrip, a charismatic politician who wins over the voters through populism and empty promises. With his cadre of advisors and brutal private militia of Minute Men (M.M.s), Windrip oversees a new era of poverty, corruption, oppression, and fear; women and minorities are stripped of their rights, all dissent is outlawed, and those who displease the government are imprisoned in concentration camps or killed.

Meanwhile, a Vermont newspaper publisher named Doremus Jessup watches these developments with horror. Doremus is torn between fear for his own safety and the safety of his family, and his moral responsibility to speak out against the regime. After one of Windrip's advisors murders two innocent men in a drunken rage, Doremus is galvanized into using his voice.

Lewis based this tale in part on the experiences of his wife, Dorothy Thompson, a journalist who had gotten expelled from Nazi Germany for writing articles critical of Adolf Hitler. Lewis used Thompson's research and personal experiences in Germany and Fascist Italy to imagine how America might become a fascist state. Unfortunately, he also had many American figures to draw upon, from Huey Long, who planned to challenge Franklin D. Roosevelt's re-election on his "Share Our Wealth" platform, to fringe figures like Gerald Winrod,note a Kansas evangelist whose antisemitism and admiration for Hitler earned him the nickname "the Jayhawk Nazi" Gerald L.K. Smith,note an evangelist who went from Long's chief adviser to, after Long's death, an antisemitic demagogue and William Dudley Pelley.note the leader of the paramilitary "Silver Legion of America," better-known as the Silver Shirts A bestseller due to its unnerving contemporary resonance, the novel remains one of Lewis's best-known works.

Adapted by Lewis himself into a 1936 stage play produced by the Federal Theatre Project. It also inspired the sci-fi series V. Not to be confused with the British alternate history film based on a similar premise.