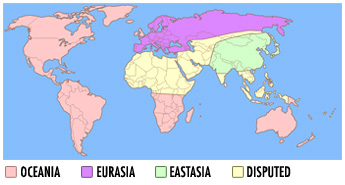 What do you mean, the borders don't make sense?
Advertisement:

When writing alternate timelines or playing around with maps, counterfactual historians sometimes don't see the point of coming up with lots of different countries, especially for regions they know little about. There may also be a need to make sure that the entire earth is PVP Balanced in more warlike stories. So what they do is just fill the map with large polities, even when there would be little plausibility to a single empire ruling these territories. This is referred to as a Space Filling Empire.

The number of empires will be at least three, the minimum number needed for alliances and betrayals, and popularised by the pictured setup of 1984.

This trope is so prevalent that the AlternateHistory.com wiki even has its own page