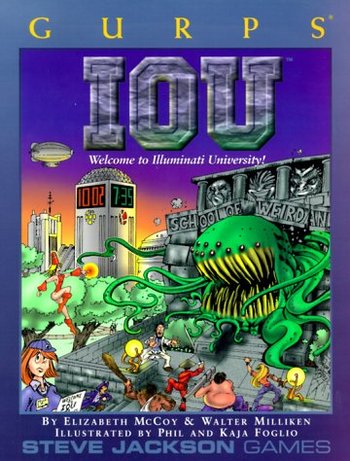 GURPS Illuminati University (also known as GURPS IOU) is a setting for GURPS roleplaying system. The corebook was written by Elizabeth McCoy and Walter Milliken and illustrated by Phil Foglio and Kaja Foglio. It was first released in 1995 by Steve Jackson Games.
Advertisement:

IOU (you are not cleared to know what the 'O' stands for) is a fictional university campus populated by people and things from across the timeline, all around the universe and from alternate worlds. The students and staff include witches, demons, werewolves, time travellers, aliens, psychics and even normal young human students. The classes available are if possible even weirder than the students.

The default tone of the rules and illustrations leans very heavily comedic with silly puns and bizarre magic and tech aplenty but the book also provides alternate takes with 'Weird' being closer to something like Buffy the Vampire Slayer (though the book predates the show) and 'Darkly Illuminated' being more serious and conspiratorial with the humour being greatly toned down.

GURPS IOU can be considered a Spiritual Successor to Teenagers from Outer Space, and the authors note the inspiration of the older game in the introduction.