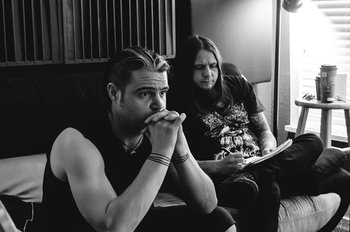 The band's current lineup; Erik Wunder on the left and Charlie Fell on the right

Cobalt is a Black Metal band from Greeley, Colorado. To date they have released four albums, one of which is a double album, and two EPs, one of which is as long as most bands' full-length albums (for that matter, it's longer than the first Cobalt album). Their style started out as fairly raw (their first album is named War Metal, after a particularly raw subgenre of black metal, although it is debatable how much their music has to do with this style), but starting with Eater of Birds they began incorporating substantial amounts of influence from Progressive Metal acts like tool and Post-Metal acts like Neurosis. Unsurprisingly, the songs got longer, the music got substantially more complicated, and the usage of wide dynamic range and unusual time signatures skyrocketed.

For the first three albums the band was noteworthy for featuring U.S. Army member Phil McSorley as its vocalist. McSorley's experiences in the Army strongly informed the band's sound, giving the band a uniquely American sound in a genre where many acts are accused of aping the sound of the Norwegian second-wave bands. Cobalt has been a two-man band in the studio for its entire existence, with the other member being multi-instrumentalist Erik Wunder, who has played all the instruments in the studio since McSorley joined the army, apart from on McSorley's lengthy dark ambient composition "Ritual Use of Fire". Unfortunately, McSorley went on a misogynistic, homophobic tirade on Facebook in 2014 (which was the culmination of a long line of increasingly vicious and hateful comments that he had become notorious for), which resulted in his being ejected from the band and replaced with ex-Lord Mantis vocalist Charlie Fell (who has not avoided his own share of controversy, though his tenure in Cobalt seems to have been free from it). Perhaps surprisingly, McSorley and Wunder (and, for that matter, McSorley and Fell) remain on good terms; in McSorley's defence, he seems to understand why his behaviour necessitated his ejection from the band, and it is also extremely possible that he was suffering post-traumatic stress disorder at the time of his meltdown. Thus far, Fell seems to have avoided Replacement Scrappy status, as his vocals on the band's most recent album Slow Forever have been generally well received by the band's fan base.

Cobalt remains fairly obscure among people not familiar with underground black metal (although they have had some media exposure)note They had an appearance on Fox News of all places, a case of WTH, Casting Agency? if ever there was one. The interviewer didn't seem to understand their music at all, or the appeal of extreme metal in general for that matter, but they are generally considered to have done a pretty good job explaining said appeal for laypersons, but for people who know about them their music is quite well loved, and with good reason. Their music sounds like the work of no one else in existence.

Tropes applicable to the band and its works: