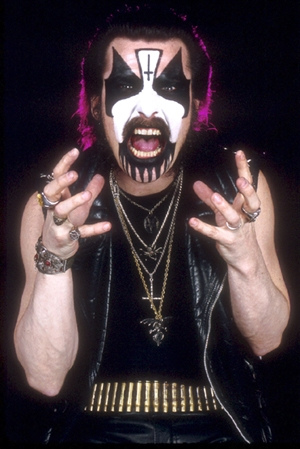 Kim Bendix Petersen (born 14 June 1956), a.k.a. King Diamond is a Danish Heavy Metal singer who fronts Mercyful Fate, as well as a solo band. He is highly critical of religion, and is an atheist in real life. note  He is a follower of Anton LaVey's Satanism philosophy, which is not to be confused with actual Satan worship, but is actually atheistic individualism combined with "ceremony and ritual". His live performances include wearing black and white face paint with inverted crosses, as well as using a microphone handle consisting of a femur bone and a tibia bone in the shape of an inverted cross. His own vocal style is another distinguishing aspect of his performance, for its range from low to unhumanly high pitch levels, as well as the often over the top deliveries.

Before forming his own bands, he previously played in the Hard Rock band Black Rose, and the Punk Rock band Brats. With Mercyful Fate and his solo band, he became known for producing comprehensive and groundbreaking Heavy Metal Concept Albums (pretty much every release by both bands).

To mainstream audiences, King Diamond is best known through Metallica's "Mercyful Fate" medley (and he would later appear in their own Guitar Hero), and the inclusion of his songs in Clerks II by King Diamond fan Kevin Smith (the admiration is mutual).