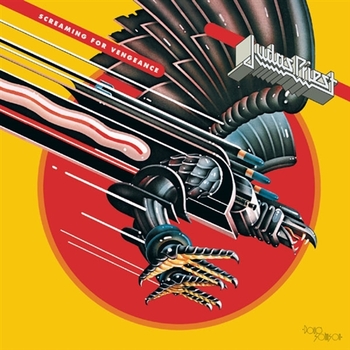 We are screaming, screaming for vengeance./The world is a manacled place.
From an unknown land and through the distant skies came a winged warrior. Nothing remained sacred, no one was safe from the Hellion as it uttered its battle cry... Screaming for Vengeance.
Text from the back album cover
Advertisement:

Screaming for Vengeance is the eighth studio album by British heavy metal band Judas Priest, released on 17 July 1982 through Columbia Records. While British Steel before it was seen as the band's breakthrough album, Screaming for Vengeance was when they started to make a commercial breakthrough in North America, reaching platinum certification from the RIAA within a year of its release. While they never generated a top 40 radio hit through their career, "You've Got Another Thing Comin'" was their highest charting hit in the US, at #67.

You've got another thing tropin':