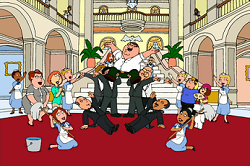 A character in a musical enters a new place and is welcomed in song by the residents.

May also serve as a Setting Introduction Song.

The enchanted servants welcome Belle to the castle.

The enchanted servants welcome Belle to the castle.