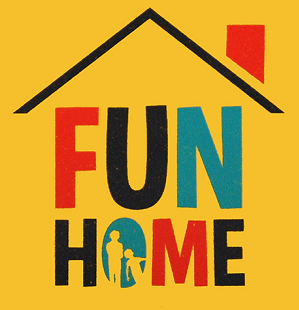 "My dad and I both grew up
In the same, small Pennsylvania town
And he was gay, and I was gay
And he killed himself
And I…Became a lesbian cartoonist."
— Alison, "Welcome to Our House on Maple Avenue"
Advertisement:

Alison Bechdel's 2006 graphic memoir Fun Home was adapted into a stage musical by Lisa Kron and Jeanine Tesori. It was workshopped from 2009-2013 before premiering Off-Broadway in October 2013 and opening on Broadway in 2015. It is one of the first major musicals to feature a lesbian protagonist.

Like the source material, the musical chronicles Alison's coming-of-age. In her middle age, Alison recalls herself at Age 10 (Small Alison) and in adolescence (Middle Allison) and how she came to terms with her burgeoning sexuality and her complex relationship with her father. In reconciling the two, Alison comes to accept her past.