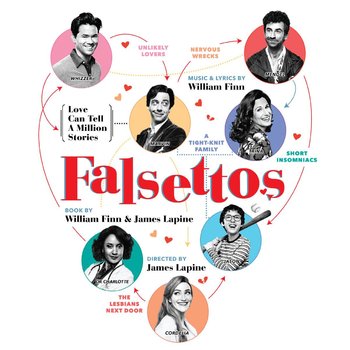 "Homosexual
Father with children,
One bar mitzvah that
Is scrupulously planned.
Lovers come and lovers go,
Lovers fight and sing fortissimo
Give these handsome boys a hand
Welcome to Falsettoland!"
—Company, "Falsettoland"
Advertisement:

Falsettos is a musical with music by William Finn and book by Finn and James Lapine. The show is an amalgamation of the latter two musicals in Finn's "Marvin Trilogy": March of the Falsettos (which was first performed off-Broadway in 1981) and Falsettoland (first performed in 1990). The two plays are preceded by In Trousers, which is not included in Falsettos. The show opened on Broadway in 1992, starring Michael Rupert as Marvin, Barbara Walsh as Trina and Stephen Bogardus as Whizzer. It closed in 1993 after 587 performances. In the Fall of 2016, Falsettos was revived for a limited run through January 2017 starring Christian Borle as Marvin, Stephanie J. Block as Trina and Andrew Rannells as Whizzer.

March of the Falsettos centers on Marvin, a neurotic gay Jewish man in 1979 New York. He has recently divorced his wife, Trina, and left his child, Jason, to be with his lover, Whizzer, an attractive younger man. Trina starts seeking treatment from Marvin's psychiatrist, Mendel and the two eventually fall for each other. Marvin expects both Trina and Whizzer to serve his needs and be loyal to him, an attitude that leaves him alone, trying to salvage his relationship with his son.

Falsettoland jumps ahead to 1981 where the characters, along with Marvin's neighbors, Charlotte, an esteemed doctor and Cordelia, a kosher caterer, come together to plan Jason's bar mitzvah, though their plans are quickly interrupted by the looming AIDS crisis.