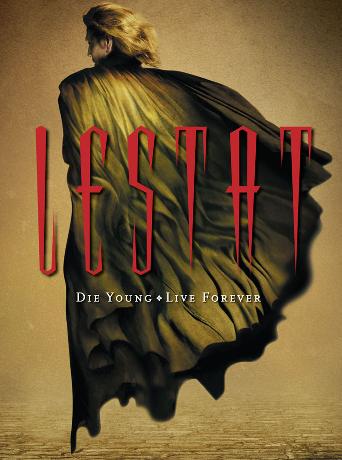 A musical scored by Elton John and Bernie Taupin, which had a successful run in San Francisco but closed after only a month on Broadway, Lestat is an adaptation of Anne Rice's The Vampire Chronicles.

The story follows Lestat de Lioncourt, a nobleman who's unappreciated by his family and makes his entrance after killing eight wolves singlehandedly. His father and brother scorn him, and he finally lets his dying mother convince him to go to Paris. Upon his arrival, he meets an old friend named Nicolas, steps out to get some air one night... and gets himself turned into a vampire.

Eventually, he reveals to his mother what he has become, and to his shock she asks him to turn her to save her from her illness. He agrees, and the two of them make their way to Paris again where they encounter the Theatre des Vampires. Lestat turns Nicolas, who refuses to drink and seal the transformation, and therefore falls ill and begins to die. So Lestat and his mother Gabrielle start off to find the one vampire who might be able to cure him, Marius. Lestat finds him, after Gabrielle has deserted him and Nicolas has died, and departs for the New World to reinvent himself. There he meets Louis and Claudia, two people who are about to teach him the meaning of the word 'unpredictable'...

As an official cast recording isn't released yet, the best place to hear the music is at the Lestat Download Center