Film / Charlie and the Chocolate Factory 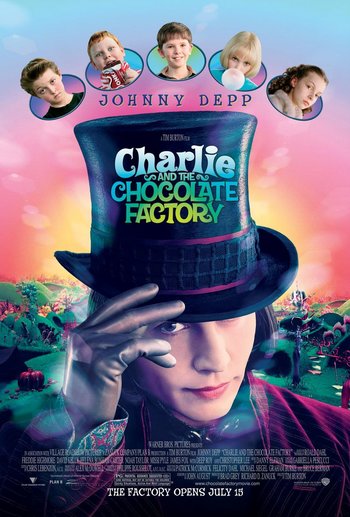 From left to right: Mike Teavee, Augustus Gloop, Charlie Bucket, Violet Beauregarde and Veruca Salt.
Below: Willy Wonka.
"Everything in this room is eatable, even I'm eatable! But that is called cannibalism, my dear children, and is in fact frowned upon in most societies."
— Willy Wonka
Advertisement:

Charlie and the Chocolate Factory (2005) is the second film version of Roald Dahl's most popular book. While Truer to the Text than the original 1971 version in many aspects, it is also subject to Adaptation Expansion, namely in giving Willy Wonka a backstory that figures heavily into the final act.

This film provides examples of (in addition to many of the source novel's tropes):

"In the end, Charlie Bucket won a chocolate factory, but Willy Wonka had something even better: a family. And one thing was absolutely certain...life had never been sweeter."
Feedback

When Augustus Gloop falls into the chocolate river and gets sucked up the pipe, the Oompa-Loompas sing a song about how terrible he is.

When Augustus Gloop falls into the chocolate river and gets sucked up the pipe, the Oompa-Loompas sing a song about how terrible he is.