Charlie and the Chocolate Factory is a novel that has delighted and terrified readers for fifty-plus years. Between Roald Dahl's love for Black Comedy, the surrealism of the film adaptations, and the darker twists placed on the bad kids' fates in the 2013 stage musical, nightmare fuel is nigh inevitable in any telling of this story if it's being told right!

Has its own page! 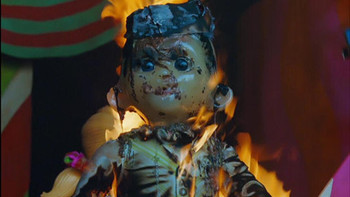 "Veruca Salt was once en pointe, but watch as we dislocate each joint. Her ballet career is looking grim as we tear her apart from limb to LIMB!"

The 2017 Broadway production and the touring version do a very good job at creating one of the grimmest and most frightening adaptations of Charlie and co's adventures in the factory. If you're planning to take your kids, then you better beware: this show doesn't hesitate in showing things truly beyond nightmarish...