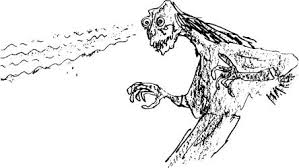 This is why you don't want to get on the Grand High Witch's bad side.

Both Dahl's adult and children's stories have earned a reputation for being very sadistic and often bone chilling creepy and disturbing. This earned him the title "Master of the Macabre" and also a separate article here, on his personal Nightmare Fuel page.

His most famous work, Charlie and the Chocolate Factory, warrants its own page, and its sequel has one as well.