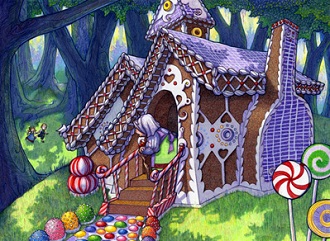 A gingerbread man sits in a gingerbread house.
Is the house made of flesh?
Or is he made of house?
He screams, for he does not know.
— Cyanide & Happiness
Advertisement:

The Gingerbread House is a stock location in fairy stories. It's where Hansel and Gretel were nearly eaten by the witch. It's the chocolate palace in Charlie and the Chocolate Factory. It is, simply put, a building made of food, usually sweets but other variations do exist.

Sistertrope of Level Ate. This often, but not always, overlaps with Giant Food and Bizarrchitecture. Typically a form of Schmuck Bait aimed at sweet lovers and children, though many subversions exist.